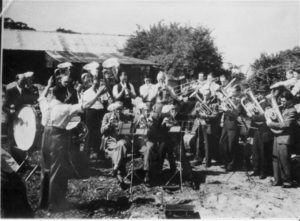 1948 – This picture is of the band rehearsing in Green’s Sawmill.

Members of the Woodfalls Silver Band, who last month won the Championship Shield of the Wessex Brass Band Association, are busily preparing for wider developments in the 73rd year of the band’s existence. Although some members of the band had not returned from the Forces, it was decided last May to re-start practices and soon the players felt confident enough to enter for the Wessex trophy. The band – not yet up to strength – includes a farmer, policeman, bricklayers, motor mechanics, lorry drivers, and factory workers. The bandmaster, Mr. G. Mitchell, who was trained as a musician in the band in his youth, has recently retired from the Royal Navy, in which he had served 22 years. He was a Petty Officer. Practises are held on Sunday mornings in a timber yard. Among those who watch the progress of the band with pride is 88 year old Mr. Mark Warner, who was one of its original founders in 1874, and his only son, Mr. W.M.E Warner (the present secretary), who before he laid down his trombone had played in the band for 35 years. Mr P.J. Green is the present treasurer.

After the war, rehearsals were held on a Sunday morning. This would have prevented them from using the Temperance Hall so, therefore, until the band was willing commit to a midweek schedule the sawmill was the only available option.