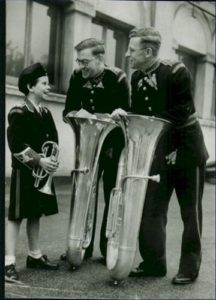 1952 – This picture is of, Left – Right: Mary Bailey, Geoff Annetts and Reg Spreadbury.

Mary Bailey was, at the time, the youngest ever player to appear in the Championship Section Finals. She was a member of the National Youth Band of Great Britain and she was later to become Principal Cornet of the highly successful Woodfalls Junior Band of the late fifties and early sixties and after a break re-appeared as Principal Cornet of the Senior Band in the mid sixties.

This picture is very popular with the media because they invariably select it for newspaper articles about the band.