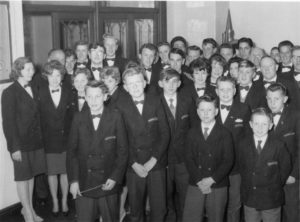 In 1959, as movie-goers waited for the big film, they were often entertained by newsreels and mini-films etc. “Look at Life” was a series doing the rounds at that time which entertained the public with snapshots of life in the UK. One of those was entitled, “The Big Blow” which featured The Woodfalls Junior Band and the famous Black Dyke Mills Band. It was seen by thousands of moviegoers the length and breadth of the Country. Above, The Woodfalls Junior Band can be seen waiting to perform on stage before before the showing of “The Big Blow” at Salisbury Gaumont. They are conducted by Cliff Kingshott.