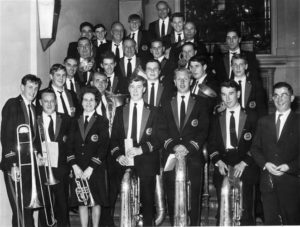 1963 – Photographed at Fulham Town Hall. The band competed in the 3rd Section of The National Finals. The band was conducted by Maurice Clark. Maurice played the clarinet in the Royal Engineers Band from 1947. In 1956 he went to Kneller Hall and became a Director of Music in the Army. He composed some twenty novelties pieces for band, one of the most popular being “Tyrolean Tubas”. He conducted Woodfalls at the 3rd Section National Finals in 1963 and this was his only appearance with the band.