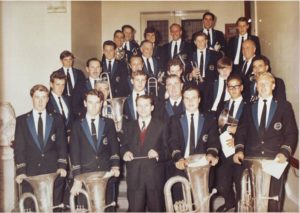 1964 – Photographed at Kensington Town Hall. The band were now in the 2nd Section of The National Finals where they played “Oasis” by Eric Ball. The band was conducted on this occasion by Mr. Albert Davies. Mr. Davies caused something of a stir at the Wessex Championships by conducting Woodfalls in addition to his regular band Bournemouth R A Band. Woodfalls won, much to the chagrin of Bournemouth R. A. A. Band.