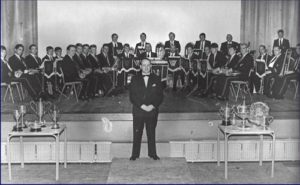 8 October 1967 – This is the band six days before the National Finals when they played Eric Ball’s test piece, “Journey into Freedom”. During the time between winning the Regional and competing in the Finals, the band made a little piece of history when it was featured in an Omnibus TV documentary about the pros & cons of competing in the London Finals. A rather grainy video cassette is still viewed by the band on nostalgic occasions!