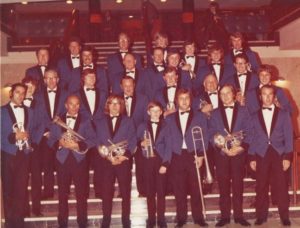 23 September 1972 – Photographed at Plymouth Contest. The band won this contest 3 years on the trot and the shield was donated to the band. It can be seen in the band hall trophy cabinet that was made for the band by Ray Read. The test piece in this contest was Elgar’s, The Severn Suite. The band also won the march contest playing Glemdene when it was awarded 50 points out of a possible 50 by the adjudicator, Major Arthur Kenny