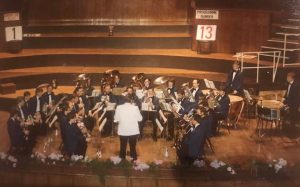 The 1985 area contest at the Colston Hall, Bristol. The test piece was Contest Music by Wilfred Heaton and the band were placed 8th out of 14 bands, conducted by Wes Garner.