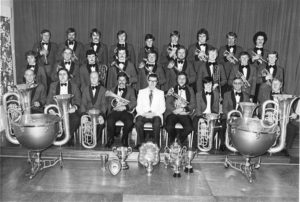 c.1982 – Photographed in the early 1980’s but what was the year and the occasion – I have put “new timps” because we owned these for just a few weeks. They were purchased especially because they came apart to make transportation easier, they proved to be a total dead-loss and we sent them back. A similar tale of a fleeting encounter could be attached to Dave Richards – as I remember it, he came to band to try out on Sop and after one or two rehearsals he was given the jacket and invited to join, this picture was taken within a couple of weeks of him joining and we haven’t seen him since – surely the jacket wasn’t worth that?