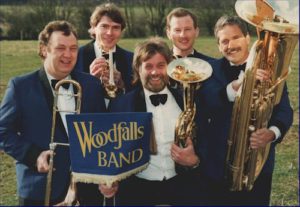 21 February 1991 – This picture was taken at the rear of the band hall. The green fields have long since been replaced with pan-tile roofs and hanging-tile architectural features, in other words, a housing estate. Ah, that’s progress! Surprisingly, the waiters jackets don’t look too bad but I never did like those velvet bow-ties that seemed to get lower the longer you had them on – Keith’s has already moved an inch down his chest and he has only just put it on!

The picture was taken ahead of the TV programme, “The Music Makers” which followed the fortunes of Downton and Woodfalls as they each prepared for the Regional Contest in April. The text with the picture was an appeal for Woodfalls memorabilia – it unearthed the original band rules from 1910!

The bandsmen are L-R Dave Shelley, Brian (Sam) Easterbrook, Keith Green, Mark Pye and Fred Barter. Fred plays Baritone but was asked by the photographer to hold a bass so that he could capture the reflection of the band hall in the bell – decide for yourself if he succeeded