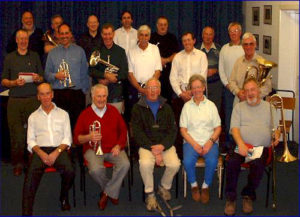 On Friday 2nd April 2004, some former members of Woodfalls Band met at the band hall, Woodfalls to rehearse for the 130th Anniversary celebration concert which is to take place at Salisbury City Hall on Saturday 26th June 2004. The current South West Trains Woodfalls Band thought it would be a good idea to reform the winning band of 1967 and to feature them in the concert as a bit of nostalgia. The members were approached by Brian Easterbrook and David Bligh and all seemed to welcome the proposal. The 1967 band was the West of England Champion Band and were subsequently featured in an historical Omnibus Arts programme for the BBC which compared the fortunes of three bands, Black Dyke Mills, GUS Footwear and Woodfalls.

Some of the former members have not played for over twenty years but after a rehearsals, conducted by Martin Portman the quality of the players soon became apparent and a schedule for further rehearsals was established. The enthusiasm was still evident and I can envisage another band at Woodfalls to add to the three that currently exist – The Woodfalls Old Boys Band could become a force to reckon with!