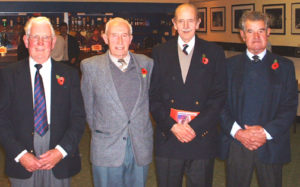 On Friday 11th November the Woodfalls and Downton Bands shared the stage at the City Hall, Salisbury as part of our Festival of Remembrance to commemorate what was probably a unique eventuality, that of two village bands which 60 years ago amalgamated to form a Homeguard Band.

The concert, which also featured Rosemary Squires and Bill Pertwee, was a great success and we were especially pleased to welcome four members from that original Homeguard Band, they are left to right, Don Moody, Don Chandler, Alan Spreadbury and Jack House. Pictures were taken and each member was given a complimentary CD.