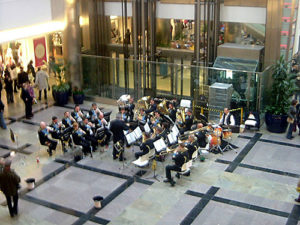 On Saturday 15th January, the South West Trains Woodfalls Band collected £1553 towards the Asian Disaster Appeal. The money was raised in just two hours during a concert that the band gave to shoppers in the West Quay shopping centre, Southampton. The band was conducted by Resident Conductor, Jonathan Camps and the light programme of music received shouts of approval from the large crowd, some of whom were hearing the band for the first time. The acoustics of West Quay were lively but with four floors it was reminiscent of the Albert Hall with many in the audience viewing from a great height. Later that day, the band met at the Redlynch Club for a dinner. Jane Lee, of South West Trains was in attendance and she was delighted to renew the band’s sponsorship for 2005.