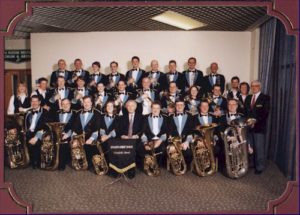 1 April 2001 – The band is pictured having just come of stage at the Riviera Centre at Torquay. They had just performed last at The West of England Regional Brass Band Contest conducted by the legendary Maj. Peter Parkes. They played the set test-piece Jazz by Philip Whilby. The adjudicator, Goff Richards gave them 3rd place, adding that he would have wished to send the first 3 bands to the finals, but that regrettable only the first 2 bands qualified. This was the second year in a row when the band had come third at the Regionals and so missed out on a trip to the finals.