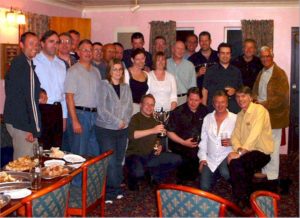 Unfortunately, the band had left Cambridge before the results, so this picture was taken at the Redlynch Club where the band enjoyed its success. The test piece was Peter Graham’s demanding work, Harrison’s Dream – a study in time and rhythm dedicated to the watch-maker John Harrison. In its 130 year history, the band has competed many times at the British Open, where its best result was equal 8th and the National Finals, where its best result was 9th, so 4th at the “All England Masters” is a real feather in the band’s cap in this, its 130th Anniversary year. The band was conducted by Steve Bastable.