Christmas, Butlins and Beyond …

The end of 2019 was a busy one for The Woodfalls Band.  Following the multiple successes at The Wessex Brass Band Association winter contest, we launched into a varied series of Christmas engagements and preparation for the Butlins Mineworkers Contest in Skegness.

We had already performed with the Salisbury Chamber Chorus, under the enthusiastic direction of Simon McEnery at St Thomas’ Church in November, where we raised £677.50  for the church restoration project.  The partnership was renewed with a Christmas Theme on 7th December at St Francis Church, again in Salisbury.

Simon’s message to both Chorus and Band included …

I know already from the many messages I’ve received how much everyone enjoyed Saturday evening, audience and performers alike, and how much it’s cemented out friendship with Woodfalls.

Comments received: “A triumph.” “Such good entertainment and what a wonderful atmosphere.” “I could happily listen … again and again.” “Awesome.” “Excellent diction … heard every word.” (?!!) “Well done and thank you for giving us all a terrific evening.” “What a sound!”

… please pass on our great pleasure [to The Band] at another seriously fun concert. We have loved working with you a great deal, and I know many of our regular audience have been thrilled at discovering you. It’s just a joy to hear you play.

… – I think we can say this has all been a bit of a success.

We have plans to work with the Chorus again at Christmas 2020 and further concerts in 2021. 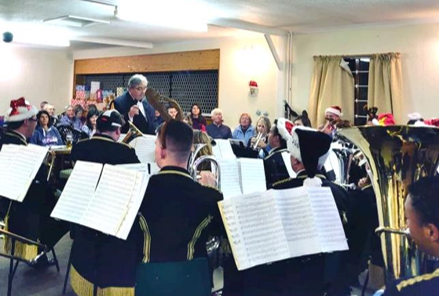 On 15th December the band completed two important local engagements with a small group playing at the Carol Service in Morgan’s Vale and The Christmas concert at The Redlynch Club.  If you have never experienced the concert it is one not to be missed!  Audience participation is the name of the game: from traditional carols to a raucous rendition of The 12 Days of Christmas with tables each taking a day.  Great fun was had by all!

It would be safe to say that we had a mixed experience this year.  Overall our playing standard was judged to be second overall and gaining second place on the test piece.  However the judges score for entertainment was disappointing, despite a more than favourable response from the audience.

The live comments from 4Barsrest were very complimentary: 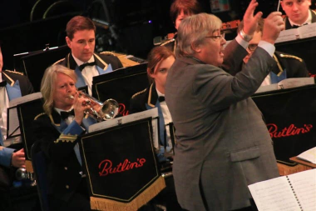 … The dramatic build to the conclusion is exceptionally well paced as the tension builds, with the ending itself losing none of the elemental power that has underpinned the performance throughout.

A high quality account from Woodfalls. This was so rich in its atmosphere and dark underbelly.

Dr Robert Childs has been the brass band world’s equivalent of Dr Quincey ME for years now — the forensic examiner approach to the inner workings of a score which is laid out in front of him like a fresh cadaver ready to be delved into for the answers.

He has not lost his appetite for it here either — previously unheard elements of detail, effect, dynamic and shape revealed under his microscope. He really has sprinkled life into this one today — more like Dr Frankenstein perhaps.

He has been rewarded by his team of Sam Fujiyamas and Dr Astons too — with some great individual lines backing his ensemble findings. Super stuff — quality from start to finish.

It amounts to a witty, thoughtfully put together programme that fused a handful of old favourites with pantomime humour that clearly made its mark on the 1700 strong audience in Centre Stage. 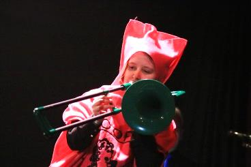 … The music and story-line combined well — even if the idea was as cheesy as any great old cheddary ‘Cinders’ tale you may have seen this Christmas with the kids.

The little mimic motifs also added to the mischief and fun and there was some seriously good playing on show too — from the imperial sounding start to scorch mark Firebird ending.

It was great to welcome Dave Hayward back to work with the band again and we thank him for his expert contribution.  As an aside, it is rumoured that Ruth Mellor (pictured above in her Whoopee Cushion Costume) made a cameo appearance in the All England Masters Snooker!

We now are working to the West of England Area Contest on Sunday 15th March in Torquay and look forward to seeing you there!