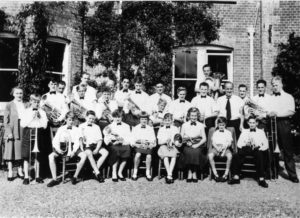 1958 – The Woodfalls Junior Band photographed at the Redlynch Church Fete held at Rollington House in 1958. The band had been formed in February 1957 under the direction of Mr. Cliff Kingshott and band manager and minder, Nora (Nan) Shelley.