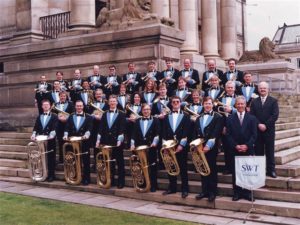 This picture was taken at the Town Hall, Bolton in May 1997. The band was in Bolton to compete in the Grand Shield and the test piece was “Variations on a Ninth” by Gilbert Vinter. The band failed to impress the adjudicators on this occasion.