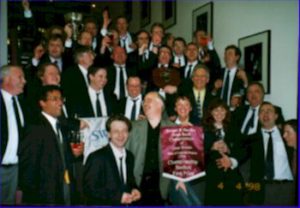 4 April 1998 – This picture was taken on the steps of the Poole Arts Centre just after the band, to its obvious delight, had been crowned West of England Champions.

The test piece was Montage by Peter Graham and the band was conducted by Melvin White.

This was only the second win at the Regional, the other being in 1967.

It was the first time that the contest had been held in Poole.