The award winning Woodfalls Band team up with the highly acclaimed Poole Grammar School Percussion Ensemble to give a concert with a difference this weekend at the Barrington Theatre in Ferndown.

Woodfalls Band, a brass band based near Salisbury, regularly performs across the UK in venues such as the Royal Albert Hall and are rated as one of the best bands in the world. And on Sunday they join students of Poole Grammar School whose percussion ensemble is the only school based percussion group in the UK that regularly gets invited to appear at the National Music for Youth Festival in Birmingham. These young performers will perform a wide variety of music from films, shows, pop songs and classical repertoire as they demonstrate the versatility of percussion music.

Woodfalls, conducted by the eminent musician Dr Robert Childs have prepared an eclectic mix of music for the afternoon concert including the hauntingly beautiful arrangement of Evelyn Glennie’s ‘A Little Prayer’ and Dan Price’s descriptive ‘An American Tale’ telling the story of the American Civil War. The concert will also include solos from principal cornetist Jan Boler who will perform ‘From the Shores of the Mighty Pacific’ and euphonium player Danny Jones will give a rendition of the popular air and variation ‘La Belle American’.

Woodfalls chairman Remus Sawyerr said “We are looking forward to joining forces with the young percussionists from Poole, an immensely talented group of students for what promises to be a fantastic concert filled with exciting music”.

The concert is at the Barrington Theatre, Ferndown on Sunday 23rd June at 3pm. Tickets are £10 and Under 16’s are free.

For more information contact Remus Sawyer on 07824 776676 or email remus.sawyerr@btinternet.com 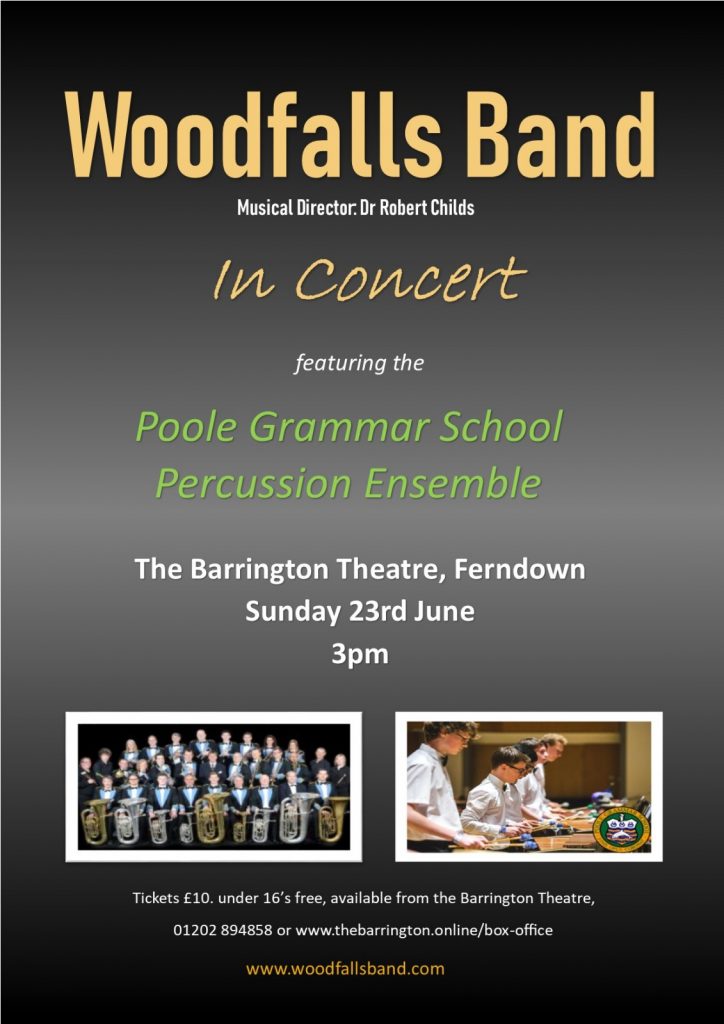