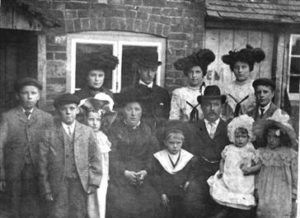 This picture is of Joseph John Green with his wife and children – at 15 in 1874 (when the band was founded) Joseph may have been too young to be a founder member so he is believed to be the son of a founder member??? This family picture is included on the band website because of the family connections which permeate the band history to the present day (2005). Seated in the front row is Joseph John Green and his wife Sarah Ann with young Charles in the middle – they were married on 28/10/1880. The rear of the picture is dated approx. 1904.

Back row, left to right:

Mable (date of birth 04/04/1882) (married G. Green) she went to Canada to live and we think her relatives may be honoured by a statue in Vancouver for the design of some state buildings in the town. Despite leaving Woodfalls, the music is still in their blood, as one of her grandsons is believed to have recently graduated as a trumpet player, specialising on the piccolo trumpet, this is incredible because the soprano cornet has been played by the Green family for generations – long since Mable moved to Canada.

Percy John (date of birth 01/10/1883) (married S. Warner) he was a cornet player. He conducted the band and also provided another generation of players including cornet players, Jack and Eric. Jack (Harold John) is father of Keith Green, a current band member.

Laurie Ellen (date of birth 16/03/1886) (married A. Kingshott) she will be remembered as the mother of Cliff kingshott. Cliff’s contribution to the band was enormous. He was a very highly respected cornet player of his day – no less a man than Harry Mortimer invited Cliff to join Morris Motors but after a short while Cliff returned to his roots. He went on to form the very successful Woodfalls Junior Band of which, many players matured into The West of England Champions in 1967.

Lillian Gertrude (Pops) (date of birth 10/06/1888) (married E. Lydford) the only information I have of Pops is that she was Gordon Lidford’s (a local character) Auntie – please let me have any connective information to the band!

Wilfred (date of birth 10/03/1890) (married E. Baverstock) he was a cornet player. His son, another Wilf, went onto provide another generation of fine players.

Harold (22/02/1893) (married Daisy Russel) he played the Tenor Horn but he is especially remembered, along with his wife Daisy as band benefactors, both of whom paid for the band hall when it was offered for sale by its owners, the Methodist Church. Hitherto, it had been rented by the band – for the full story go to HISTORY and click on LOCATION.

Kathleen (date of birth 28/04/1985) (married William Barker) she married Bill Barker on 20th May 1920 at the Woodfalls Methodist Chapel. William’s family came from the Lake District and his father was ‘head-hunted’ to come to Downton to oversee the re-building of the Tannery which he then managed for a number of years. William and Kathleen met as pupils at Downton Primary School, later moving to Chorley in approximately 1926 when their first daughter was five years old.

Joseph John Green (date of birth 13/09/1859) he was one of the founders. He is Great Grandfather to David Shelley and Keith Green, both still playing in the band.

Linda Jane (date of birth 24/12/1902) (married Percy Charles Dredge) she was the first wife of trombone player, Percy Dredge. Linda died at the age of 37 and is buried in St Birinus Church cemetery next to her brother Archie (real name Arthur) who died less than a week before her.

Arthur (Archie) (date of birth 29/12/1892) (married A. Brooks) he played the cornet and conducted. His Granddaughter is Susan Beaton and she has a silver baton and some medals of his. The following is part of his obituary which appeared in the local newspaper: DEATH OF THE BANDMASTER It was with deepest regret that the residents in the district learnt of the death of Mr. Arthur (Archie) Green of Woodfalls, at the Salisbury Infirmary on Sunday at the age of 48 years, after a a very brief illness. Mr Green became unwell at his work on Thursday away from home and was admitted to the infirmary, where he underwent an operation. He leaves a widow and an only daughter. He was the sixth son of Mrs. John Green , The saw Mills, Woodfalls, and the late Mr. John Green. Of a most likeable disposition, he was held in high esteem . At the age of 12 years he joined the Woodfalls Band under his father who was then Bandmaster and became a well known Soprano player with the band. After the death of his father, he became deputy Bandmaster and afterwards, Bandmaster, a post which he retained with the senior band, until the formation of the Woodfalls Silver Junior Band in 1936 when he was again appointed conductor. He was beloved by all the boys of the band, who under his tuition have gained numerous successes in the various contests.

Nora (Nan) (date of birth 16/11/1897) ((married William Charles Shelley 07/04/1920) father of Basil. She was a tireless worker for the band. Her roles included many years as band secretary, teacher, organiser of concerts, social evenings etc etc. She was well known throughout the banding movement and was a popular figure at the draw at band contests. She, and many others deserve a page to themselves and hopefully this will be done in due course. One sad fact is that the girls were not permitted in the band at that time – thankfully, times have now moved on!

That completes my current knowledge of the Green Dynasty that produced so many fine players and stalwarts of the band. If you have any more information just let me know.