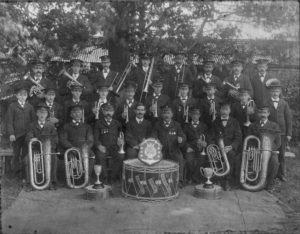 This picture was taken to the side of the band hall (not the shed in the rear of the picture) where the band still practises today. I believe that this picture was taken to celebrate the winning of the three trophies on display. The two cups seen in the above picture are in our trophy cabinet today as they were won on three consecutive years, 1922/23/24, however, they are also engraved with the year 1911! The South Wilts Brass Band Association Shield was commissioned in 1910 when it was won by Bowerchalke but Woodfalls, or The South of England Temperance Band as they were then known, won the shield in 1911/12/13 and so it too remains in our trophy cabinet today. They are all engraved with the afore mentioned years! I conclude, therefore, that the picture was taken in 1911 as this was the first year that all three were in our possession.