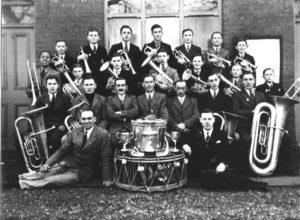 This picture of The Woodfalls Junior Band is taken in front of the band hall.

In 1935 the band struck its worse patch. Death and unemployment reduced the active membership. Two stalwarts of the band, however, Messrs. J. Snook and R.W. Spreadbury, turned from outside recruitment and with courage and vision, began patiently to rebuild the band from youth of the village. They formed a music class of 20 Woodfalls school boys, who, in 1936 entered the grading section of the Wessex Brass Band Association, and by the summer of 1939 had become so proficient as to win the championship of the Association’s Section B. Its conductor was the late Mr. A. Green. As an encouraging preliminary in 1938 it had gained fourth prize in its section at the Alexander Palace band festival.