1952 – Boarding the bus for London Finals 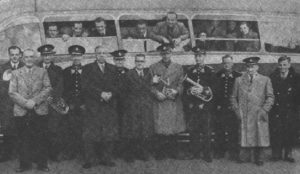 This rather grainy newspaper photograph shows the band in 1952. It is about to depart from Woodfalls to attend the “Daily Herald National Band Championship” in London. The band qualified to appear by gaining second place at the area qualifier that year. The following is an extract from the local newspaper:

… About 200 people from Woodfalls attended, joining close on 10,000 others. The test piece was “The Frogs (of Aristophanes)”. It is a new brass work, and immediately strikes the lively tone and tricky temper of this high-spirited music. The brasses are called upon to portray the croaking of the frogs. Although Fairey Aviation Band gained the trophy the members of the Woodfalls Village Band aquitted themselves well against some of the finest bands in the country.