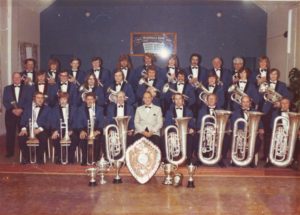 1974 – The Woodfalls Band photographed for their centenary in 1974. Proudly displayed in the centre of the picture is “The Grand Shield”, the trophy of the Manchester Spring Festival Contest. The band, conducted by Courtney Bosanko, won the Grand Shield playing “Prince Igor” by Borodin, arranged by Roger Barsotti.

Winning the Grand Shield qualified the band to play at The British Open Championship in Manchester in September 1974 when the test piece was “James Cook Circumnavigator” by Gilbert Vinter. The standard of the 1974 performance at the open earned an invitation to the 1975 contest playing Fireworks by Elgar Howarth. The band was invited yet again in 1976 when the test piece was Percy Fletchers “An Epic Symphony”.

On the rear wall of the stage can be seen the embroidered plaque by Mrs. Woodyates celebrating the centenary.