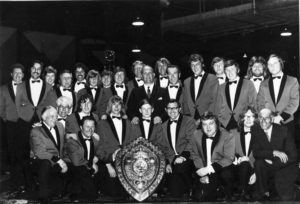 1974 – Pictured on the stage of the King’s Hall, Belle Vue, Manchester after winning The Grand Shield for the first time.

The Grand Shield contest and its big brother The British Open were held for many years in this famous/infamous hall. The band played in the boxing ring, minus ropes, surrounded by the audience. Many players claim the hall had a special atmosphere. On this occasion the young percussionist, Dave Kennel, came off stage convinced he was being spat at, in fact, it was just the roof leaking on his timpani.

This building has now been demolished and the site redeveloped for housing. No longer will the bands have to compete with the clinking of the glasses in the adjoining bar or the noise of the fun fair outside.