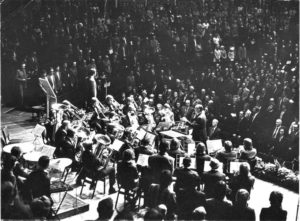 1975 – Photographed on stage in the Royal Albert Hall, London on the occasion of the National Championships. The band was drawn to play number 1 and are pictured playing The National Anthem whilst the audience and announcer, John Dunn stand to attention.

The test piece for the day was “Un Vie Du Matelot” (A Sailor’s Life) by Robert Farnon. The band were under the direction of Courtney Bosanko.

This had been a busy year with the band doing well in both the Open and the Nationals plus a win at Reading on Carnival Romain. Something had to go wrong, they came second to Bournemouth R. A. on Kensington Concerto at the Wessex.