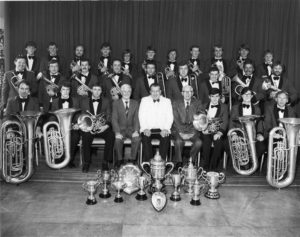 The Woodfalls Band pictured in the band hall in 1985. This photograph was taken shortly after the band’s second victory at the Manchester Spring Festival (Grand Shield) Contest. The event was sponsored by The Daily Mirror and thus in the centre of the picture is the Daily Mirror Cup rather than the Grand Shield, as seen in the 1974 picture, which was awarded to the 2nd place band. The compensation for not having the Shield was that the cup held 13 pints of best bitter, a measurement made at a pub in Manchester and later confirmed in the Bat & Ball, Woodfalls.

The Woodfalls Band is one of only two bands to have won the Grand Shield on 2 occasions. The band won in 1974 on “Prince Igor” by Borodin under the direction of Courtney Bosanko, entered again in 1984 under the direction of David Evans but was unsuccessful and then won again in 1985 playing Eric Balls “Journey Into Freedom” conducted by Wesley Garner – two wins in three appearances!

Winning the Grand Shield earns the winning band and runner-up an invitation to the British Open Championships in Manchester thought by many to be the top brass band contest in the world. Having earned an invitation a band is only invited back on the merits of its performance at the contest. Woodfalls has been invited to the British Open 5 times, in 1974, 5, & 6 and 1985 & 6.

In 1985 the Open test piece was “Salute to Youth” and they were again directed by Wesley Garner. The following year the choice of test piece was nothing if not controversial, “Fusions” by Howard Blake (with sections omitted) AND 2 movements from “An Epic Symphony” by Percy Fletcher. The band was directed by Derek Greenwood in 1986 and it was a very long contest!